A review and follow-up meeting of CAAJ was held in the Press Club of India, New Delhi on Saturday January 12th, 2018. It was attended by representatives from Delhi NCR, Uttar Pradesh, Punjab and Haryana.

After the successful National Convention Against Assault on Journalists organised in September 2018, this was the first formal meeting of CAAJ constituents where the following agenda was put up for discussion:


a) Moving forward with expansion process of CAAJ (membership mechanism etc.)
b) A Convention in Raipur for mobilisation in favor of Journalist Security Act, Chhattisgarh, around third week of January.
c) Institutionalisation of CAAJ through state level meetings, state coordination committees etc.
d) Maintenance of blog, social media accounts and a rapid response team.
e) Meeting of CAAJ constituents.
f) Other miscellaneous issues that arise out of discussion. 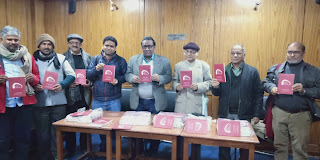 CAAJ core team was involved in the production of a booklet in English and Hindi conainining detailed session-wise NCAAJ report as well as database of attacks on journalists in India till December 2018.

The reports can be accessed from the following links:

Apart from deliberation on the expansion of CAAJ and sustaining the process two immediate programs were taken.

1) A meeting in Chandigarh on the successful verdict in the murder of journalist Chhatrapati Ram Chander in the third week of January.

For Raipur Seminar, a coordination committee was formed consisting of following:

A coordination Committee of CAAJ was formed in Delhi consisting of the following:

A follow-up meeting for Raipur and Chandigarh events would be called very soon after contacting with local representatives and finalising venue, date and time.