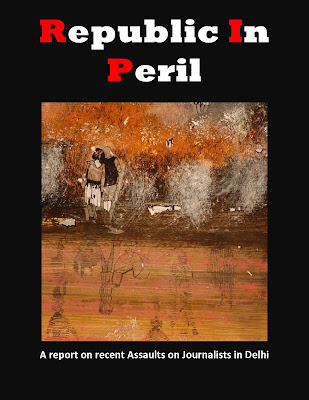 The report outlines three phases of assault in Delhi.

First in December, 2019 that started after anti-CAA protests erupted with centrestage being Jamia Millia Islamia University. A total of seven cases have been documented where Journalists who went to cover Jamia were assaulted physically. These assaulted journalists included mainstream news channels, agency, international media BBC and digital platforms. The assaulters included mob and police.

This first phase lasted for five days from December 15 to December 20, 2019 although assaults continued nationwide for the whole month till the end of 2019. These 16 cases of nationwide assault in journalists covering anti-CAA protests were documented and released by CAAJ (see Annexure in full report).

The second phase of attack lasted much longer, almost for the whole month of January, 2020. On January 5, 2020 journalists were targeted outside Jawaharlal Nehru University campus, which was attacked on the same evening by a veiled mob. The number of cases reported in various media outlets and first-hand cases reported on twitter count to half a dozen. Those assaulted were also specifically targeted, stopped from coverage and directed/intimated by the mob.

This phase reached its peak on the last day of January, 2020 when journalists were hounded, beaten up and detained at ITO and Rajghat. The numbers included more than ten, many of them senior scribes who were there to report Satyagraha March and pay homage to Mahatma Gandhi on his death anniversary. More than half a dozen journalists were detained until dark in a local stadium. Delhi Police was solely responsible for this assault. Press Club of India released a condemnation statement on the same day.

The third phase is a dark chapter of horror in the history of Freedom of Press in Delhi that reminded many of the Emergency days. Around 18 cases were reported where journalists were not only stopped from coverage, but identified as Hindu/Muslims, ashamed publicly and beaten up by the rioting mob. There camera, equipment broken and vehicles burnt up by the mob. Many cases have gone unreported due to horror.

Mainstream media journalists from almost each and every banner recounted their ordeal on social media. Almost each and every media rights organisation condemned the assaults and raised question on the complicity of police forces in not containing the ravaging mob.

The report observes these three phases in continuity. The first spate of attacks by the state and non-state actors was a testing ground that builds up into a full-fledged consolidated attack on Press during Delhi violence in the last week of February.

The frequency speaks a lot. The first phase lasted for about a week, second phase stretched up for the whole month but cases were almost same in number counting up to a maximum of ten. The last phase was not only horrible in terms of numbers and frequency but intensity too. Within a matter of two days when violence spread in North-East Delhi, around 18 assault cases took place that makes ten cases per day an average.

Not only this, the nature of assault was also unprecedented. A Journalist was directly shot at, one was forced to drop pants and another was forced to chant religious hymns. Religious identification was the bottom-line during third phase of assault.