This statement is in condemnation of the judicial harassment being meted out to senior Assamese Editor Mr. Manjit Mahanta, Sahitya Academy Awardee writer Hiren Gohain and farmers' leader Akhil Gogoi in a case of Sedition slapped upon them for participation in a peaceful protest against the Citizenship (Amendment) Bill in Guwahati. 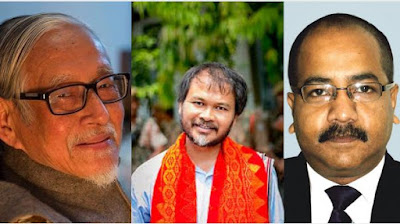 On January 9, 2019, Latasil police registered a case against one of Assam's prominent scholar and intellectual Hiren Gohain, Akhil Gogoi, President of the Krishak Mukti Sangram Samiti (KMSS) and Manjit Mahanta, Convenor of the Forum against Citizenship Act Amendment Bill, under Sections 120(B) (“punishment of criminal conspiracy”), 121 (“waging or attempting to wage war, or abetting waging of war, against the Government”), 123 (“concealing with intent to facilitate design to wage war”), and 124(A) (“sedition”) of the Indian Penal Code.

On January 11, 2019, the Guwahati High Court granted bail to Mr. Manjit Mahanta and interim bail to Hiren Gohain and Akhil Gogoi against a surety of Rs. 5,000 each and fixed January 22, 2019 as the next date of hearing of the case.

The case was filed after Hiren Gohain, Akhil Gogoi and Manjit Mahanta attended a public rally organized by the Forum against Citizenship Act Amendment Bill in Latasil, Guwahati, on January 7, 2019, during which they expressed their views against the religion-based Citizenship (Amendment) Bill, 2016 and strongly opposed the passing of this piece of legislation.

Despite their opposition to the Bill, the three human rights defenders have publicly stated that they are not against the Constitution of India, and are solely asking for equal constitutional protection for the people of Assam State.

CAAJ is deeply concerned with the colonial era sedition law being imposed arbitrarily by the state upon anyone who dissents. In this case Mr, Mahanti is a senior TV journalist and Editor and Mr. Gohain has been awarded by the Academy of Letters for his intellectual contributions. Both are towering figures in their respective fields.

Caaj demands immediate removal of sedition charges upon all of them and restore the democratic right to dissent and freedom of expression in the state.

February 02, 2019
In an unexpected and abrupt manner BJP workers in Raipur party office Ekatm Parisar attacked a journalist on Saturday evening, snatched away his mobile camera and deleted the recordings of the ongoing party review meeting.

After BJP's defeat in recently held assembly elections in Chhattisgarh, party had organised a review meeting in its Raipur head office that was being covered by many journalists. The meeting went out of track when party workers started sloganeering and infighting. A journalist with The Vice News Suman Pandey was recording the events as usual with his mobile camera. BJP workers spotted him and started pressurising him to delete the video.

When the journo did not relent, they started beating him and snatched his camera. Pandey was injured in this clash. He got a severe cut on his forehead.

Local journalists are infuriated at this episode. Pandey has lodged FIR with the local police naming three BJP leaders including BJP district president. Journalists are on a si…
Post a Comment
Read more